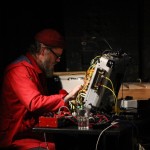 Up next at Schneidersladen: this month, on Thursday the 26th at 6 pm  we have invited Richard Scott to talk about his improvisation technique on the Eurorack Modular Synth. Please save the date for a bunch of fun and some insight on patching and live performance.

Richard Scott is a free improvising musician and electroacoustic composer working with electronics including modular synthesizers and controllers such as the Buchla Thunder and Lightning and his own self-designed WiGi infrared controller. He has been composing and performing for over 25 years, recently working with Evan Parker, Jon Rose, Richard Barrett, Kazuhisa Uchihashi, Shelley Hirsch, Ute Wasserman, Michael Vorfeld, Frank Gratkowski and his own Lightning Ensemble. He studied free improvisation with John Stevens, saxophone with Elton Dean and Steve Lacy, and electroacoustic composition with David Berezan and Ricardo Climent. He has released many albums, for example with Grutronic and Evan Parker for PSI records, The Magnificence of Stereo (sruti BOX) and has a solo double modular synthesizer LP, Several Circles, and an album with Sidsel Endreson, Debris in Lower Earth Orbit, both released by CUSP Editions in 2016. He is involved with several concert series in Berlin: Basic Electricity, AUXXX, Klangkeller and Sound Anatomy

Richard will perform two pieces on his suitcase modular and discuss the nature of improvisation and performance with a modular synthesizer. He will talk about his own history using analogue and digital tools in performance. Issues such as control, randomness and interface and the problems of deigning a small portable but extremely flexible modular, developing an individual aesthetic and the nature of musical time, the cosmos and the meaning of life may well be discussed!