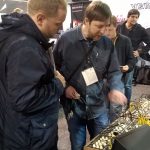 Thomas Haller from Vermona presents a multitude of new modules at the NAMM show. First of all, there is the Twin CV Filter, a combination of two multimode circuits with switches for high pass, band pass and low pass operation. They can be used in serial, parallel or individually. Other features include adjustable gain sections with overdrive capabilities, CV inputs with attenuators and more.

Additionally, Vermona developed an expander, which adds separate outputs for all filter characteristics plus a normally not usable notch mode to the Twin CV Filter. Furthermore, the extension module contains polarizers. 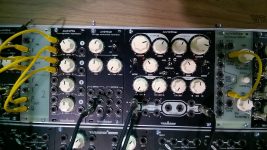 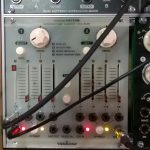 With the Random Rhythm, Vermona also designed a module that generates gate signals by chance. – Well, not exactly, as it is possible to adjust the probability with which its four channels (1/4, 1/8, 1/16, 1/3) emit voltages. Offbeat and dice functions allow further variations. Using its clock input, the Random Rhythm can be synchronized to external equipment. 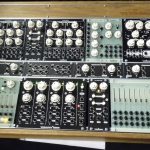 Vermonas fourth module is the Quadropol, a four channel polarizer with CV inputs and mixing functions. All mentioned products will become available this year at Schneidersladen. As if that weren’t enough, the lads from Vermona also showed concepts of some other modules, in detail a transposer and a CV controllable mixer with step mode. The ladder makes it possible to switch between channels using a clock signal.