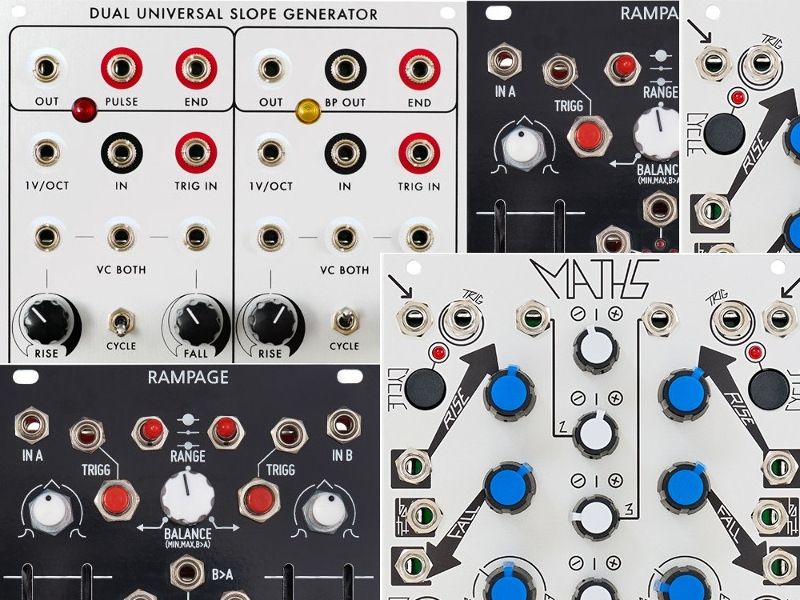 What about … Dual Function Generators

Today we have a look at three modules that can be described as Dual Function Generators – the Make Noise Maths, Befaco Rampage  and the Serge Dual Universal Slope Generator (DUSG) by Random Source. Dual Function Generators follow the same core principal – they can do whatever you want them to do. What seems a bit of a stretch is of cause one, but it is closer to being true than you might expect. Because these circuits usually don’t just do one thing, but can be anything from a VCO, Slew Limiter, Envelope, Trigger Delay, Filter and so on. These multi-functional tools are very popular in modular synthesizers since the early days. There was the Envelope Shaper from the EMS System and the Dual Universal Slope Generator from the early Serge System for example – and the Serge module is now available for eurorack.

And why it is a great idea to put two function generators into one module is shown by Make Noise Maths and Befaco Rampage. Both take the signals from their two sides and process them independent from your regular output. Maths for example gives you a mixing stage with additional inputs, attenuverters and four outputs. Rampage takes the generated signals from both sides and compares them in an analog logic section. Both modules try to create as much useful information from its generators as possible. They do point in different directions, but are both useful additions for almost any system. Another nice aspect with having two function generators in one module is being able to modulate one side with the other. With voltage control of several parameters, mixing stages, trigger outputs and more, these modules are not just real all-rounders but also boosters for creativity.

But first let’s have a look at the basic structure of these modules and one of the common use-cases: A dual function generator usually consist of two more or less identical sides (left/right) that can be used independently. A typical use for them is to work as envelopes or LFOs. Therefor the modules provide inputs that expect triggers or gates to start generating the rising and a falling CV of an envelope, both can be modulated with CV so that they can have variable lengths. Maths, Rampage and DUSG all provide a cycle switch that restarts the generated envelope as soon as the Rise and Fall stage are completed – now the module functions as a LFO. All three modules have Trigger/Gate inputs to start the Rise/Fall CV, voltage control of both of these parameters at the same time and individual voltage control of both parameters, variable envelope characteristics and END-OF-Something outputs. All three modules have an input jack and a dedicated Trigger input. While using the Trigger input the resulting envelope will always consist of only two stages – Rise and Fall. While using the other input to start the envelope it is possible to implement a Sustain stage to the envelope. The duration of the Sustain stage is just as long as the gate is high minus the time of the Rise section. With all these features it is possible to very precisely shape envelopes – way more complex and versatile than many other envelope generators. While losing the Decay stage of an ADSR, you get voltage control of the remaining stages and the possibility to precisely work on the shape of the envelope. the normal input jack is also the way to go f you would like to use the modules as slew limiters for example. But as we can not discuss all the possible functions here, let’s focus of what sets the modules apart from each other – for example their size: DUSG (26hp) > Maths (20hp) > Rampage (18hp). And there are more differences:

The unique part of the Rampage module is the central logic and comparator section that creates signals from the differences between both sides of the module. Using the Balance control you can determine the weight between the left and right function generator. MIN is an analog AND gate, which outputs only the minimum voltage. On the other side the MAX output only emits the currently highest voltage. B>A is a circuit comparing the amplitudes of both curves and generating a pulse when B higher is than A. Additionally there is a slope detector on both sides of the Rampage. This means the module outputs gates while the current slope is rising or falling. Depending which slope is given, either the rising out or the falling out emits a gate signal until the slope changes again. AND: The Rampage has a dedicated trigger button for both sides, so you can manually trigger the envelopes – very handy!

The Serge DUSG is a direct successor of the original design in 4U format. The eurorack version has been slightly revised and optimised, for example the tracking when used as audio oscillator. Therefor both sides feature dedicated 1V/Oct input jacks. This is something that separates the DUSG from Maths and Rampage – these two do also work as audio oscillators but are not able to track the 1V/Oct standard reliably. In general the DUSG is pretty straight forward when it comes to usability and the user interface – if a clear layout and comfortable spacing is one of your main concerns when deciding on a module, this is the Dual Function Generator to go for. …and it sounds great as an audio oscillator!

The Make Noise Maths might be one of the most important eurorack modules of all time. It has been around for a long time and still is one of the most recommended modules when it comes to planning a new system. The envelopes that can be created with Maths are considered to be especially snappy and musical. What Maths brings to the table besides two envelopes/oscillators is a four channel mixer with individual and mixed outs, end of rise, end of cycle and logic outputs. This attenuverting mixer section doesn’t seem to be very exciting at first, but it is one of the most useful additions in “Dual-Function-Generator-Land” – with its ability to not only mix but also offset, attenuate and invert signals!

All in all these are three great modules that will all add something special to your system. You really cant go wrong with any of these modules and therefor it is a thing of personal taste, the little aspects described above that differ, or maybe size that can give the decisive momentum.

This is by no means a complete overview of available modules nor a full review of the discussed modules. The what about… text are here to give you new ideas and maybe another perspective on things. All these modules offer more features than we have talked about in this post. For further information please click the provided links or – even better – visit the SchneidersLaden and ask our experts in the showroom.

From our friends in Asheville there is a shipment on the way including Maths, Rene, PressurePoints, Echophon, Optomix and Knobs. So if you are waiting for such please be aware to pick it up next week. 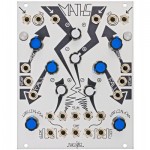 Make noise Maths (2) will be coming in soon, so if you made a reservation already, please be prepared to pick it up shortly.. if not, please send your request asap to still get one of these. 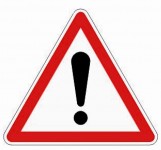 We have a new webshop, now.  All of our existing clients will get an email latest tomorrow (july, 2nd) with their new login and pass to be able to see existing orders, to add new ones or so.
Some things will not work fine directly, some things will be better, please let us know about this per mail to shop@schneidersladen.de . WE will go ahead working it out. Thank you and good night.

Make Noise released a smaller version of their well known module Maths now – called FUNCTION. It includes a sample&hold output and will be sold in the US for 165 Dollar. We hope to get a first bunch of them in quite soon, preorders per mail can be made now, in a few days the product FUNCTION can be found in our webshop too. 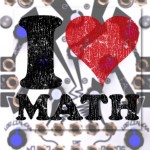 Good morning – we are all excited like little girls on ponys when we heard that the maths (original version) will come very soon …. and yes – we have tons of pre reservations which we would like to fullfil asap – but we don’t know if enough units for all backorders will come at the same time – which means that it is maybe not possible to make all of you happy at once … please  ‘ ve a bit patience – we let you know when they arrive and if we can make your dreams come true.

Make noise will ship even more of their brilliant modules tomorrow, so latest mid next week we could be able to ship your order on Brains, Maths, the Optomix, Pressure points, their new Analog Memory, Rene and Wogglebug finally their nice 1HP blind plates .. if youre on the lists (?). So have a plan to make some noise ! 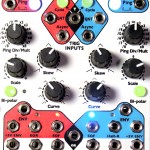 the first production lot of the Pingable Envelope Generator by 4MS pedals did finally arrive today. Preorders are shipped immediately, very few units are not yet promised. It is a eurorack module with possibilities comparable with those of a maths but even more complicated  , read about it now.

Wogglebugs and Maths, Brains and some more of their nice blank panels came in again five minutes ago. 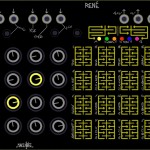 Their remake of the famous ModDemod and the René will be probably coming in later this month, a waiting list is already growing,  René will go online shortly.

MakeNoise has sent us a bunch of modules. We await a package in 1-3 days including Wogglebugs, more Brains and even more Maths modules again, waiting for a new daddy.. or mommy of course. Thank you,  MakeNoise !

.. was offering their eurorack version of aSerge VCS as quite a prominent module once. Now the Bananalogue VCS was topped in sales by a ‘dual version and more‘ called MATHS by makenoise . Also the VCS was unfortunately just never available. Anyway – now we heard that the inventor called seth nemec is planning to go further very soon working on new comparable products that we would like to offer, so stay tuned! 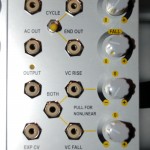 If we trust our most experienced buddy with serge stuff from Hamburg, both – The VCS by Bananalogue and the Maths by makenoise – are nothing compared to the original Serge VCS, but at least for the price it makes sense to check them both. The design of the latest version of the Bananalogue is not making everybody happy, but the maths is not less special. The Bananalogue is officially licensed, both models are still short on production as far as I know.

Some more wogglebugs, some more QMMG but most important: some MATHS are on their way to us, I guess! so we are surprised and looking forward to them coming in very soon.