A lot of new things to see at NAMM in Anaheim this year.

QuBit Electronics show the already released OCTANE, a CV and gate sequencer module with integrated clock generator, quantizer and memory banks. Two modules can be cascaded to achieve longer sequences and to get more memory! Available again in few weeks for ~330USD

CHORD, a four voice polyphonic DCO i.e. an analog VCO with digital control. The oscillators’ frequencies can be synched, easily tuned to chords with inversions of course. It has mute and voltage controllable waveshape per VCO. Price will be between 500-600 USD and it will be available 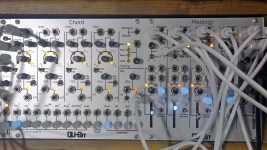 ANA (not pictured) is one VCO from the Chord, only 2HP wide but still a full VCO for only 150USD.

MIXOLOGY prototype is a voltage mixer module with 4 mono and two stereo channels. It features voltage control over level and panorama as well as mute and solo that can be activated with gates. Will be released mid-summer.

Speaking of powerful mixers, WMD has a prototype of the PERFORMANCE MIXER on display. Eight channels, voltage control of a number of parameters, a headphone out as well as a cue function, wither to pre-listen to a channel or to create a sub-mix. 650USD, available in summer. 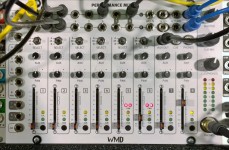 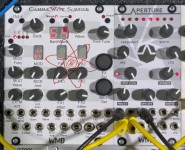 Other gear by WMD are an early prototype of the Gamma Wave Source 2 wavetable oscillator – harsh and gritty as ever but more flexible and easier to use. The APERTURE is a variable width bandpass filter with individual LP and HP resonance settings. A number of additional feedback options can make it sound nasty. Will be released in one to two months for ~350USD.

4ms are there as well and present a prototype of the DUAL TRIGGERED SAMPLER, a monster of an clockable audio sampling module with lots of memory banks, voltage control of important parameters. A SD card slot allows for really long sampling time. Use one channel to playback, the other to re-record the processed sample material. Infinite possibilities. 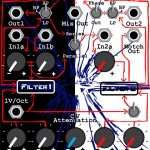 The new Micro Hadron Collider VCF by WMD could not have been sent for three weeks waiting for one little spare, now the parts came and shippings will start very soon! We are looking forward to some first modules within the next ten days ..  so, check the web, see the view and order soon. 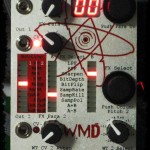 The latest review of our friend William Matthewson alias WMD will be called Gamma Wave Source, we are looking forward to play on it, the first shipment is hardly awaited for mid January.