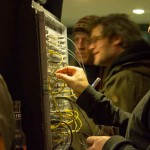 In 2011 we took our modular stuff mounted up in a Karrussell to the Club Kater Holzig,Berlin for a gig during the Bermuda (Berlin Music days 2011). Carlo Krug, Tom, Paul and HerrSchneider was performing the furniture mixed down on the club PA by Thomas “sternchen” Stern.

This Video  has been made to introduce the gig and the idea of the karrussell. In the end it was not the way as we expected it, but as Tom said in this “part 1“: “Its the nature of an experiment that it may fail” ..what was quite wise. Carlo stated “Less is mostly more”, but HerrSchneider confirmed that “we had some fun”, even after loads of work with it.

The Karrussell will be in use again now: HerrSchneider takes it to some venues and festivals over europe to perform some kind of sound and workshop again:
Vienna, Moozak Festival: 18./19. September
Munich, DigitalAnalog: 11./12. October
and Cologne, Synthesizer days inside Music Store: 15./16. October,
then back home to Berlin. 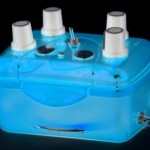 Do it yourselves! Please try at least to understand what we are talking about: borrow a soldering icon or buy one and book your workshop now: This Friday (Nov 5th) you can solder your own BingBong, RingDing, Fuzz-O-Mat, This Saturday (Nov 6th) you can also make a bumsss or a Bingbong to create your own music on really selfmade machines then – it will make you happy !!

Around 7pm on saturday we will remind you what kind of horizont this experience can open to you if you wish to go further: The DIY synth from Doepfer, the original prototype of Doepfers Dark Time sequencer,  the rare Bumss de Luxe will be shown and finally Navs modular lab will give you a musically introduction of electronic music nowadays to make you ..
..think about Do I really need to solder? and/or how-if-then-what-for? to end up with love it or leave it – it will be fun.. b.t.w.: here is a PDF with answers to your questions.