Once a customer has given names and addresses to Schneidersladen to send an order to, we do so. If goods are NOT arriving these addresses, if they arrive defectively (YES, we make mistakes – sorry) or if they will be returned for other reasons, we usually offer a replacement or credit the money to send it back as soon as the goods are back to us or things are cleared.
Once a shipment did arrive at an address of the customer and has been received by him or her or e.g. HIS MOTHER we do NOT wire back the money as long as the package within the goods has not been returned to us.
End of story.

In our webshop we could correct the mistake having 19% VAT on orders from Suisse. in General please dont hesitate ordering even with such mistakes, we still double check every incoming order manually and personally to prevent mistakes, so dont worry about such. Still in progress is the change to be https for your safety, we work on it.  Thank you for your tips and patience, if you have more, please write to SHOP@schneidersladen, thank you. 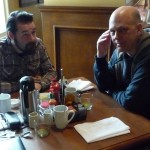 Eric Barbour alias Metasonix complained about the americans who often dont like his way to promote his products – so the new version of a tubesynth is just called S-2000 having no additional name as the earlier wretchmachine.

The cheapest metasonix product ever has now been released as the F-1, a tube distortion pedal. We brought some of them to get them reviewed asap.

The unbelievable I-cunt (no pic here) 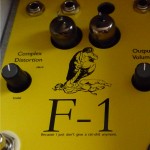 was an exclusive deal with our american colluege analogue haven alias shawn c. who probably was quite proud on having such a peversive looking unit in stock for just his own.  Because we could not check the difference, I would say the F-1 is probably better and most probably much cheaper!

Scott Jaeger alias the Harvestman had the most tatoos visible on the Analogue haven booth if I remember this right.
Being one of the very few gentlemen with no beard this year, he did inform us, that his production scale /waiting time for modules will be much shorter in the very near future. We had a nice chat there and hope the best. 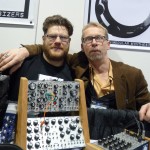 Richard Nicol, the man behind Pittsburgh modular surprised us a lot with his brilliant ideas for small affordable  starter systems and of course his very friendly aura.

As with many others we had a positive meeting with him and are looking forward to a long-term partnership with Pittsburgh Modular. 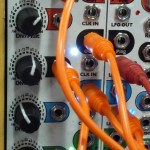 Their Clock Distributor, internally connectable with their Quad pingable LFO – it  could be a successful colluege of the existing Vermona Fourmulator –  is one of the news by Dan Greene alias 4MS   and at least a musical highlight on the analogue haven booth downstairs in Hall E. 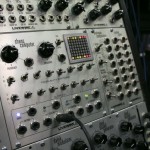 Finally today we could read ourselves that mike brown alias Livewire will present his chaos computer on the Namm as a new module besides two others (The Voltage Mechanic and
The Voltage Distributor).  As the chaos computer has been presented on our superbooth three years ago already we still hope that they can really make em real now, we already ordered some once and hope they did not forget it!

On the Namm 2011 in Anaheim our dear american colluege analogue haven will present the dark time sequencer by doepfer and probably some more news from the uncounted american modular inventors, too. Our dear colluege Big City Music will also be there presenting the brilliant 4ms products, Karl Ekdahl Moisturizers, probably News and more by WMD and others.  We will stay tuned for other exhibitors and keep you informed about all the relevant things over here asap. 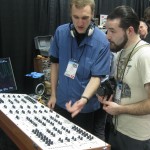 Down in Hall E shawn alias analogue haven exhibited the stuff of our friends from doepfer, tiptopaudio, theHarvestman, Malekkoheavyindustries, MakeNoise, Livewire,  monorocket and last but not least a friendly guy from australia called john pillans alias Mungo enterprises. He introduced an insane awesome just the biggest desktopsynth ever, a starship console being an eight voice polyphonic digital cv-controllable synth with full memory. It seems to be a lot of fun in a brilliant look without words (see pic)! The price is still unclear (but this is not the issue).