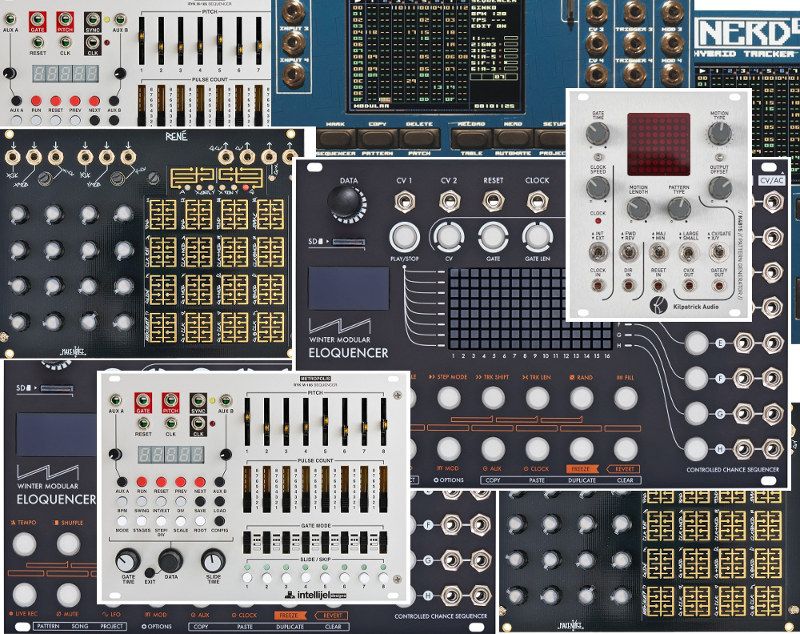 In part 1 of this series we had a look at more classic ways to do your note sequencing in eurorack. We found out that there are some very interesting new approaches, which use long-known methods of sequencing and add some exciting new aspects. Here we are focussing on even more advanced ways to tell your instrument when to play which note. Again we are focussing on sequencers that feature CV and trigger/gate outputs at the same time. These sequencers are typically used for note sequencing.

The K4815 is no ordinary step-sequencer. It creates sequences by combining a scale, a visual pattern (as shown on the display) and a sequence playback motion to determine the rhythms and notes that are actually played. And there are many other parameters that can be edited for even more variation, for example the note and sequence length, as well as the transposition, direction of playback, and so on. With its visual interface, it is fun to play and most of all it provides new and surprising results.

René is the world’s first and only Cartesian Sequencer for eurorack. It was named after the French philosopher and mathematician René Descartes, as it uses his cartesian coordinate system to unlock the analog step sequencer from the shackles of linearity. With the knobs you can set 16 different voltages. The several clock and CV inputs now determine in what order these 16 voltages are read out. Sounds simple? It is in fact very versatile and the touch plates make this sequencer especially exciting! Therefor it is a sequencer that lives from interacting with it.

The Intellijel Metropolis is based on a classic design called the RYK-185 sequencer. It provides a very intuitive way of sequencing and brings a lot of functionality to its 8-steps. It shines with different trigger modes, glide, rest and skip per step, it has swing, a quantizer and a clock generator. But the most interesting function is that each step can be repeated before proceeding to the next one – up to eight times. The metropolis is already a modern classic and often referred to as the instant techno generator.

multiple tracks at the same time

The Eloquencer – a long awaited and feature-packed sequencer with a total of eight-channels (!) for CV and gate sequencing. It basically is 8-track 16-step sequencer BUT: Comprehensive random, variation and modulation options plus several playback modes allow users to create very complex melodies and beats, it is possible to do polyrhythmic patterns, ratcheting, fill and shuffle, there is a build in quantizer and sequences can be combined to form songs and modulated by CV. AND you can store it all on a SD card! Sounds complicated? – it isn’t!

It follows a concept that has already been used in very early digital music sequencer software. This software ran on hardware like the Fairlight CMI, Amiga and C64, newer adaptions would be the Renoise or Jeskola Buzz. Now XOR has adapted the Tracker concept for eurorack, with 8 tracks, a nice display and all necessary buttons to navigate through the software. And the best thing – with the expander it is not only possible to add MIDI in- and outputs to the NerdSeq, but also to connect a Sega Gamepad!

And of course there are way more options than these! Find them here.

This is by no means a complete overview of available modules nor a full review of the discussed modules. The what about… text are here to give you new ideas and maybe another perspective on things. All these modules offer more features than we have talked about in this post. For further information please click the provided links or – even better – visit the shop and ask the SchneidersLaden experts in the showroom.