The guys from Random Source show their new TKB at Superbooth 2018, a redesign of Serge’s classic touch keyboard and sequencer combination. 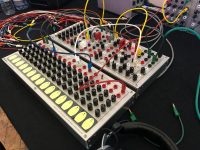 Just like its predecessor, the machine features four tracks with 16 steps each. They can be used separately (vertically) and jointly (horizontally). The touch sensitive keys are pressure sensitive. – Kind of an aftertouch control. The feel is awesome! Serge fans will soon discover that Random Source added a new glide feature for the first track. It is controlled by the second channel. The touch keyboard can be decoupled from the sequencer, meaning both sections are usable independently. Thanks to key priority, it is of no harm to press several keys at one time. – Oh, there is a vertical reset as well! We’ll tell you more about all the TKB’s features as soon as the first units arrive at SchneidersLaden. 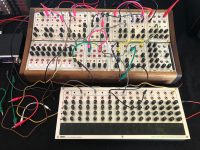 Random Source also presents an eight-step sequencer module at Superbooth 2018. Its concept is pretty much straight forward. The original design, created by Serge in the 70’s, was updated with an All Gate output. One special feature: You can jump to steps using trigger signals or buttons.

By the way: Random Source told us that the first batch of Variable Q VCFs and Resonant Equalizers will be shipped to us soon. 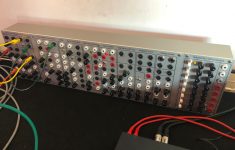