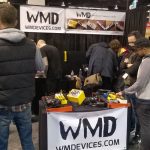 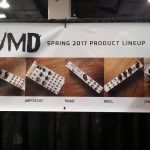 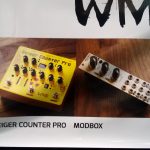 Arpitecht is a well equipped quantizer and arpeggiator, which allows the user to quickly select and edit scales, add slides, configure rhythms and a good deal more. Up to seven octaves (-1 to +5) can be employed to create intoxicating melodies. Thanks to a multitude of CV inputs it is possible to create continuously varying results in no time. For playing chords, WMD invented the Triad. This module generates three note values out of one incoming pitch signal. Users can not only choose the triad used, but also the inversion. Modulations of both parameters are possible as well.

The Overseer is a stereo VCF based on the designs of DJ filters. Compared to the circuits of well-known mixer manufacturers, WMD’s module sounds a lot more beefy while retaining the basic character. On top of that, the functional range was broadened to make the Overseer a flexible tool for sound design. Another stereo tool from WMD is the MSCL, a punchy compressor / limiter with editable ratio, threshold, attack, release and gain parameters as well as a side chain input.

Last but not least, WMD built a dual LFO module called Modbox with phase and skew options plus noise as well as sample & hold outputs. 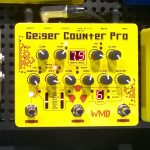 The new Geiger Counter Pro Pedal has now over 700 wavetables to bitcrush you into the elysium – this time with 12 instead of 8 bit -now you can morph now between the wavetables  and it comes with wet / dry poti / Midi  / 2x expression pedial inputs /Noise Gate / Lowpassfilter & 16 User presets.

It should be available around  april and cost ca 449$.