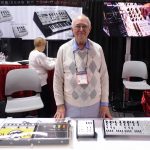 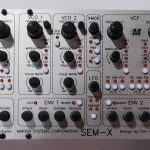 Tom Oberheim showed an Eurorack version of his iconic synthesizer SEM at the NAMM show. The SEM-X is composed of two modules. One contains the synthesis circuits and control elements, the other provides the user with plenty of patch points. This dual-style layout eases the housing in already crowded modular systems. Both components are connected via a cable on the back. In terms of sound, the “X” is a full blown SEM. – And more! By comparison to the patch panel desktop version, VCOs and modulation capabilities of the SEM-X were updated. First of all, the oscillators not only feature saw and pulse waves, but a triangle as well. Additionally, there is a noise generator. The LFO offers four waves (sine, saw, square, sample and hold), the envelopes have ADSR parameters. On top of that, there is an XMod section, allowing the first VCO to influence the pitch and pulse width of the second oscillator as well as the filter.
In other news, Tom Oberheim also announced two effect modules, 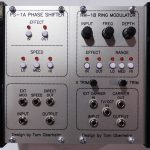 the PS-1A Phase Shifter and the RM-1B Ring Modulator. Both are based on vintage circuit designs, but offer more parameters and connectors. Tom told us, that the idea to create this modules formed after talking to a music composer, who was working successfully in the movie industry for many years. After retiring, the man got a big Eurorack system for his home, but wasn’t happy with the quality of phase shifter and ring modulator modules available. This is why he still uses the old, extremely smooth sounding effect boxes the new releases are based on.
According to Tom Oberheim, SEM-X, PS-1A and RM-1B will be available this summer! – We’ll make sure you can preorder them at Schneidersladen a.s.a.p!