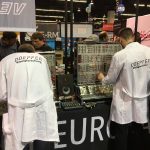 The inventor and most classical eurorack brand Doepfer now released their version of a mixing desk inside the system in a definitely modular form. Plenty of their modules are also available now as a so called vintage version in black so they are getting back to the classical shine of a (moog-style) modular taking it to the complex possibilities of nowadays modulars. The existing Doepfer products in silver aluminium are classical themselves in between, still built in a very high quality for mostly very affordable prices.

The earlier combination of A-138-O/A-138-P as a simple four- to sixteen-channel Mixer can very soon be expanded by the A-135-4-A/B/C to have the 4 to 16 channels added with CV-controlled AUX, PAN, LEVEL and MUTE parameters. The modular component 135-4C is a four channel envelope follower opening a new horizont of level control in eurorack systems. Apart from this, Doepfer was presenting the comeback of their high end VCO that had to be discontinued once their curtis chips was no longer available (as far as I know). Now the “new” A-111-2 is available in a wide and a very small version, see all details shown by Patrick Detampel in this Video: