Gammons MODULAR SYNTHESIZER ENSEMBLE has been on tour during November 2017. We have already published some thoughts about his project in Bludenz that can be found here. Earlier in November he was at DEFINE festival in Sønderborghus, Denmark.

“Ny Kunst i Sønderborg” organises an annual festival with the aim of presenting innovative, pioneering artists. At the same time, Define University will be held with a series of workshops, the results of which were presented as part of the festival’s program. This year, the topic “modular” was examined from three different perspectives. Digital, with Johan Eriksson (SE) (Automatonism), formal, as performance concept “Mobile Exact” with Claus Haxholm (DK) and Analog with the Modular Synthesizer Ensemble by Gammon (A). 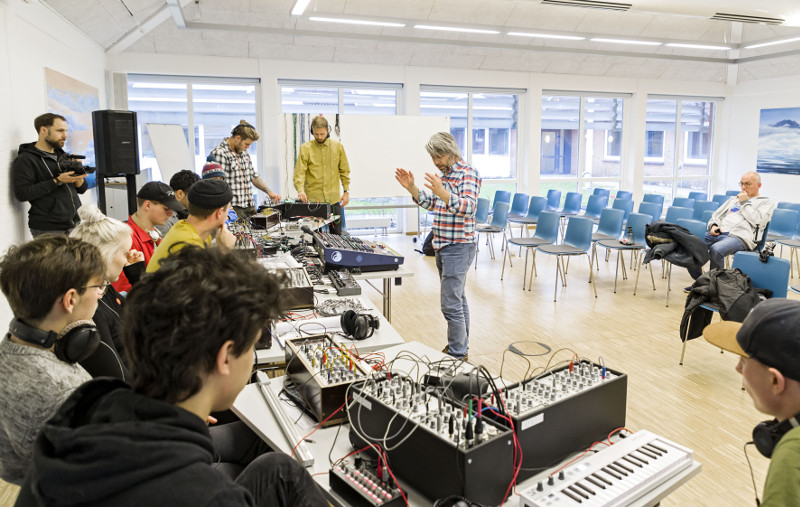 The Modular Synthesizer Ensemble operates with a fixed set of instruments (12 modular synthesizers) and a changing formation. This project involved working in a Danish Hojskole with students of the electronic music class. The students were all experienced musicians, but have not yet had any experience with the Modular Synthesizer. During the 3 project days, not only the functioning of the instrument was learned, but also music was composed, studied and rehearsed especially for this project. Among other things a composition for Morse code and speech melody by Manuela Kerer (IT).

The outcome of this ensemble work was presented on Saturday during the festival program at Sønderborghus in Sønderborg. Mads Nielsen, one of the students concluded, “Well the project itself is just really nice. It is not happening very often that you get the chance to explore ten nice modulars – and playing them with others” and Oscar Metcalf-Rinaldo commented “I think the project was structured in a very nice way that led to an organic flow of creative ideas being channeled into something exciting and unique.” The students specifically pointed out that it was a unique experience to play music together as an ensemble, and this was rated more valuable than emphasizing theory and technical aspects.

To give you a better insight into this project, Gammon produced the following video: