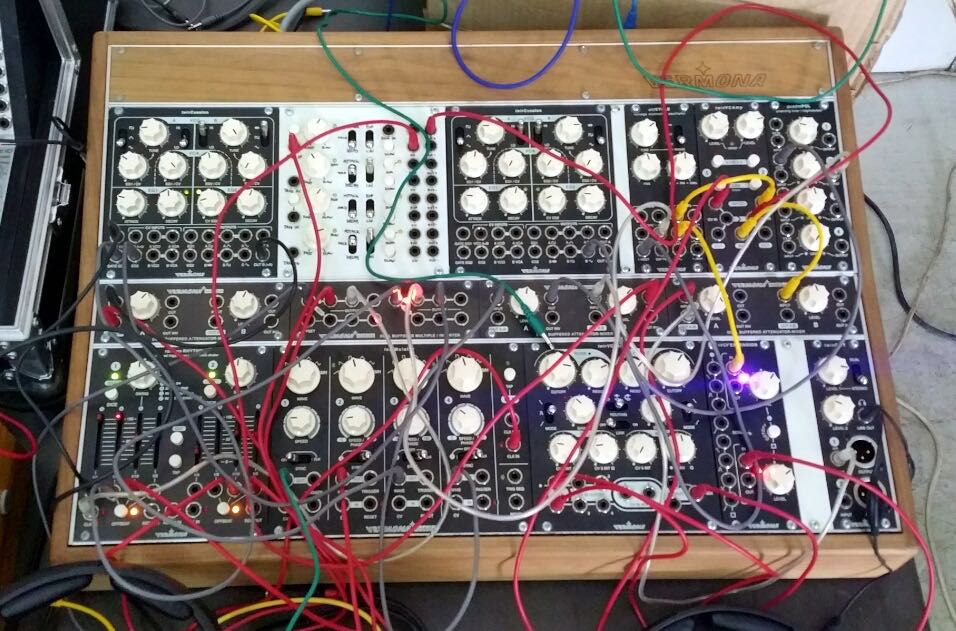 Modular Day Barcelona was a complete success again. The halls were full of interested and interesting people and the many workshops were well attended. There were probably more guests on site than last year. A rain shower had its premiere this year, but as it drove the visitors straight into the exhibitor’s hall, it was not really unwelcome at all, except perhaps by the chefs that were cooking a Catalan paella (Fideuà). For them it was quite a fight to keep the pan dish from degenerating into a fish soup… which luckily didn’t happen!

On the exhibitor side there have been the usual suspects: Befaco, Erica Synths, Endorphin.es, FrapTools, TouellSkouarn and many more. For the first time Mr. and Mrs. Verbos personally honored the Modular Day Barcelona.

Like in the past years speakers were strictly forbidden at the booths and only headphones could be used. Our systems were well prepared with Doepfer A-139-2, ACL Audio Interface and Vermona Twin Out. And as a result of that regulation the overall atmosphere was very relaxed. Most interest could be raised by new modules. For Doepfer, the A-111-4 Quad Precision VCO was quite well received. A lot of VCO in a small space. Approximately 100 Euro per VCO are a really good deal. Thanks to the MS-Matrix and a funny stereo patch, ACL caught a lot of attention underneath the headphones. The new Discrete Core Ladder VCF in particular has created a positive impact. The striking appearance of the Quad Envelope prototype from Vermona caused lots of curious glances and so the news like randomRHYTHM or quadroPol didn’t get lost in the unified and beautiful Vermona look.

In addition to pure modular synthesizers, the Taula4 Rotary Mixer and Podium Mikrokosmus (active summing mixer) have expanded the shown product ranges with the presentation of audiophile gear made in Spain. Hopefully we will see more of these products at SUPERBOOTH18. In contrast to the last years the evening concerts took place only partly at the actual venue, the hangar. The program was about as strenuous as it can get. Party till 05:30am (at least officially) and then start again at 10.30am. So you had lots of opportunities to have a good time, but not for sleeping.

We want to say thank you to the Befaco Team who have handled everything in a very professional and friendly way. See you at SUPERBOOTH18!