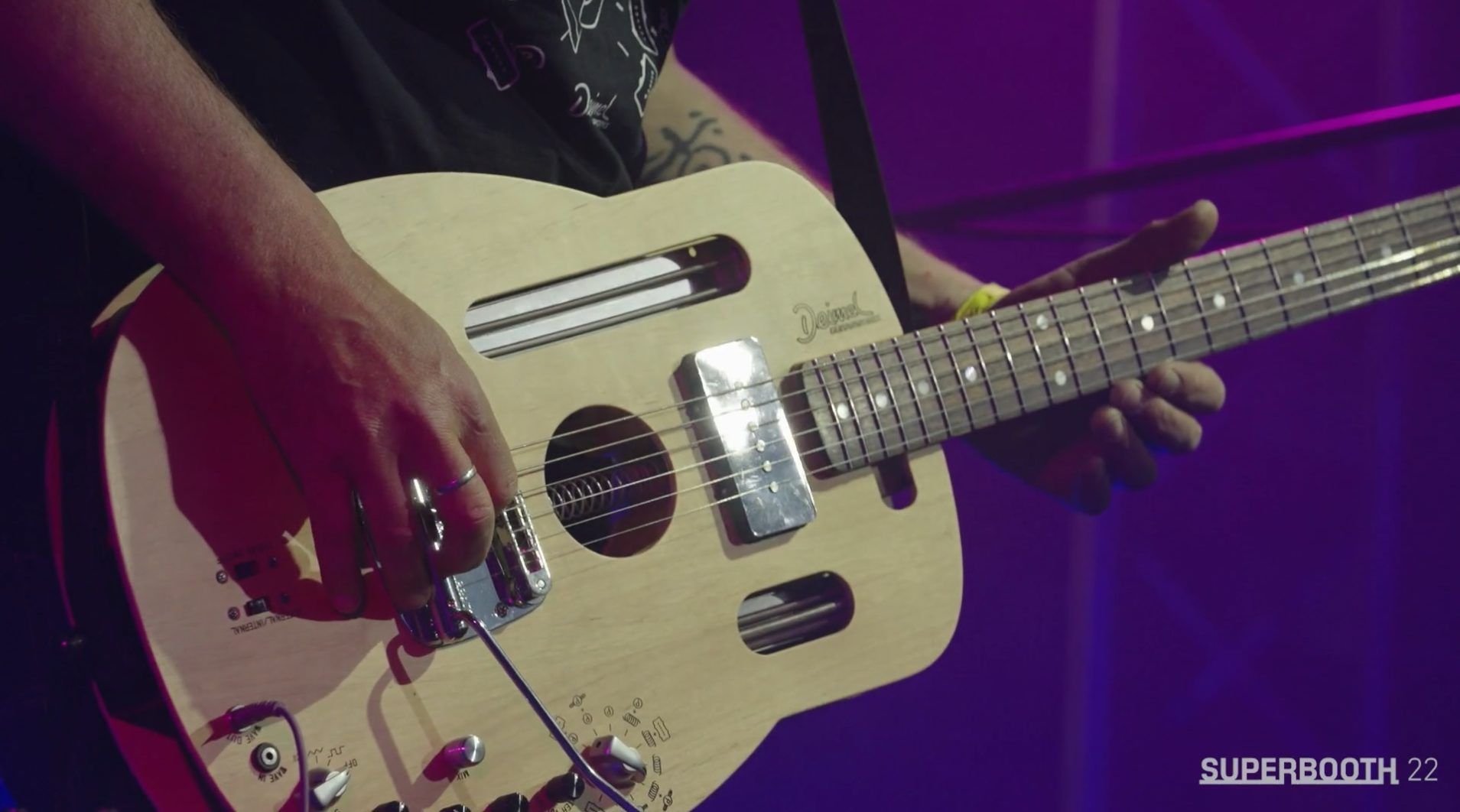 Schneider TM played an improvised live set with the fascinating prototype of the electro-acoustic experimental guitar “SPARK” at this years SUPERBOOTH22 and SOOPERgrail. This special guitar was developed together with the luthiers Kora Jünger and Frank Deimel from Deimel Guitarworks.

In addition to conventional magnetic and piezo pickups, some of which are installed in different positions in the body such as the headstock etc. for expanded sound possibilities, the guitar also has playable reverb springs, one of which is attached to the tremolo construction and can be tensioned. The different sound sources can be combined via a global selector switch and sent to an integrated electronic LesLee, which oscillates back and forth between the signals and is connected to CV In & Out sockets for integrating e.g. modular synthesizers via control voltage. The “SPARK” can not only be played acoustically, electrically and electronically, but as an electro-acoustic sound object it also offers possibilities for playing techniques that are not typical for guitars.

Schneider TM is the internationally reknown multidimensional music project of Dirk Dresselhaus which oscillates extensively between adventurous electronic pop-music and experimental, sometimes improvised freeform music, while occasionally bringing these and other opposing elements together. 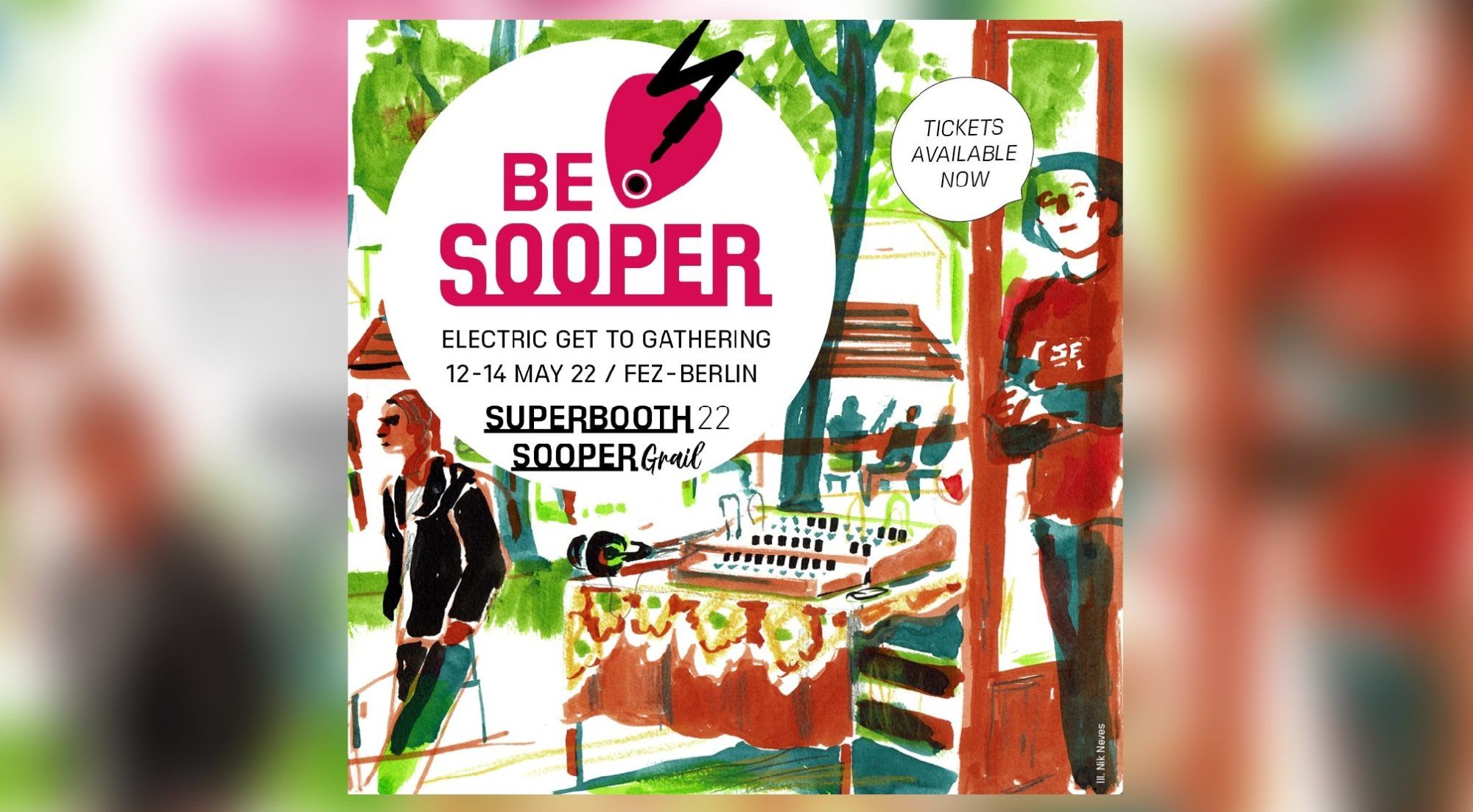 The international trade fair for electronic musical instruments will take place in spring again; the presale for SUPERBOOTH22 and SOOPERgrail tickets starts today! Get them here.

After the Corona troubles, SUPERBOOTH22 shows itself clearly developed for the anniversary event. At the trade fair with festival character there will be deep insights into the professional world of electronic music and its instruments, their application and development, as well as workshops for students and young people.

Over three full days SUPERBOOTH22 presents itself in a new scale and with a special atmosphere. The area surrounding the FEZ-Berlin offers outdoor exhibition tents, bungalows, concert and presentation stages in the spacious park area. So far, 150 exhibitors showcase electronic music instruments and everything else needed for handmade and electronic music in the main building and around it. For the first time, there will also be SOOPERgrail as an independent trade fair dedicated to the art of guitar building.

The founder HerrSchneider on this:

„Last September’s SUPERBOOTH21 was described by all participants as the best yet, despite a lower number of visitors. We want to reflect on this again for our anniversary and would like to surpass it. The possible expansion to a trade fair for other (musical) instruments at the Berlin location holds great potential: Techno and electronic music continue to be our basis, but the respectful mixing with the craft of other professions opens many new doors.“

Some manufacturers have already demonstrated last year how the creative exploration of the border areas between guitars and complex electronic applications can open up new horizons. The guitar fair SOOPERgrail has its own stage for concerts and presentations inside, offers its guests access to the shared lake stage along with a catering area on the lawn and free access to other events in the park area. Guests of SUPERBOOTH22 are also and explicitly welcome at SOOPERgrail. Of course, only the SUPERBOOTH22 ticket is valid for the so far much larger exhibition area of SUPERBOOTH22.

The presale for SUPERBOOTH22 and SOOPERgrail starts online today. Due to the pandemic, the ticket contingents remain limited for the time being, all tickets are valid for the respective trade fair areas and event days without restrictions from 10 am to 7 pm as well as for the evening program. For simplification, any type of special and trade visitor tickets have been omitted. 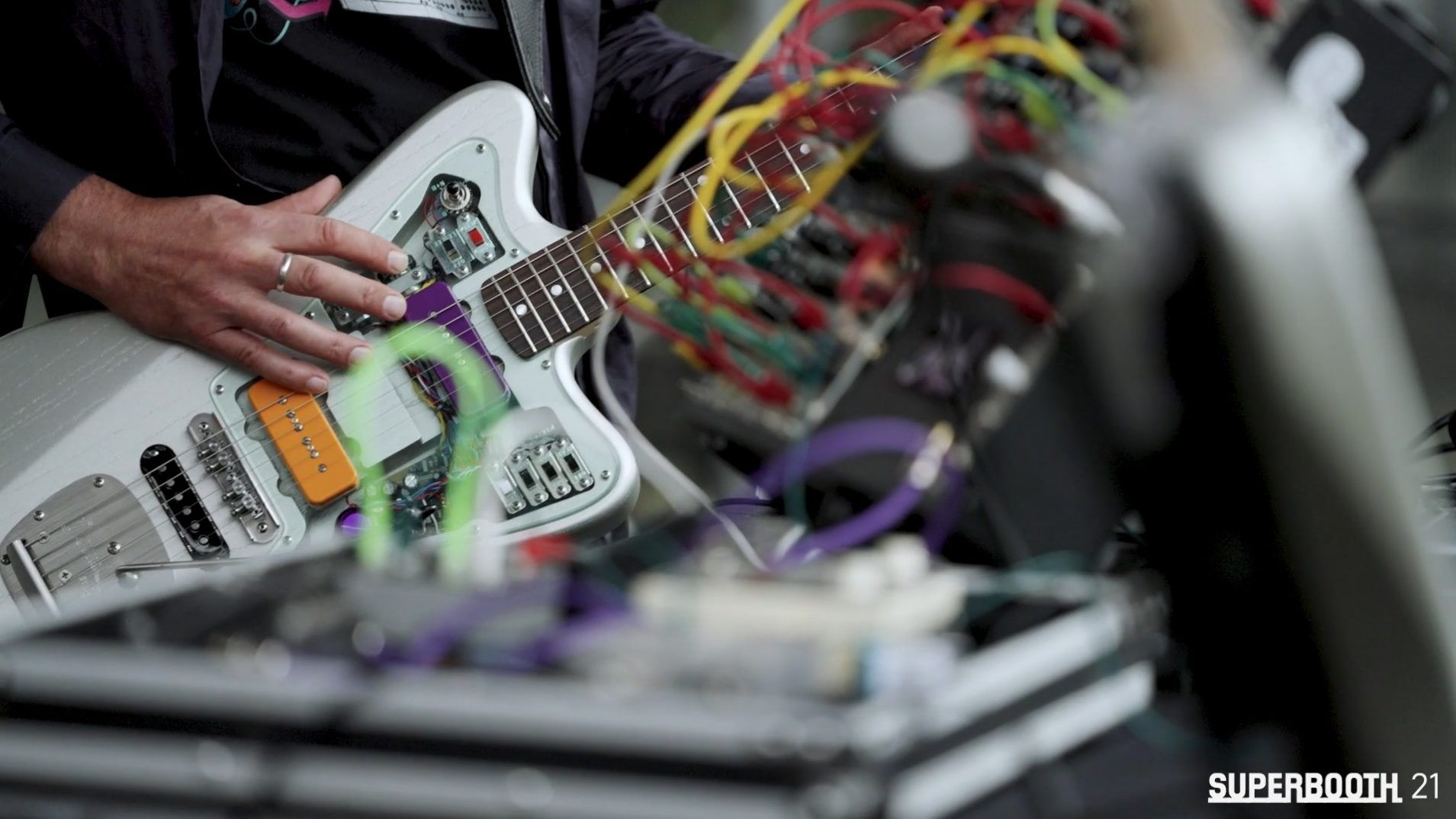 Dirk and Jay didn’t have their first appearance on a Superbooth stage, but this concert was the first one they performed on Deimel Firestar LesLee® Synchronizer guitars. These handmade guitars were being premiered in public for the first time at SUPERBOOTH21. The newly developed custom guitars made by Deimel Guitarworks allow for connectivity and interactivity via CV in/out on modular synths.

The LesLee guitar makes it possible to either send or receive a waveform or sending out a CV signal. It is even possible to do sync recording by using a CV to Midi generator, or to be in sync with video signals for performing artists – something that hasn’t been used in this performance, but opens up even more possibilities.

Enjoy their unique performance merging two worlds of electronic sound that can also be seen as a preview to what the upcoming SOOPERgrail guitar show will be about.

See you at SUPERBOOTH22 and SOOPERgrail! 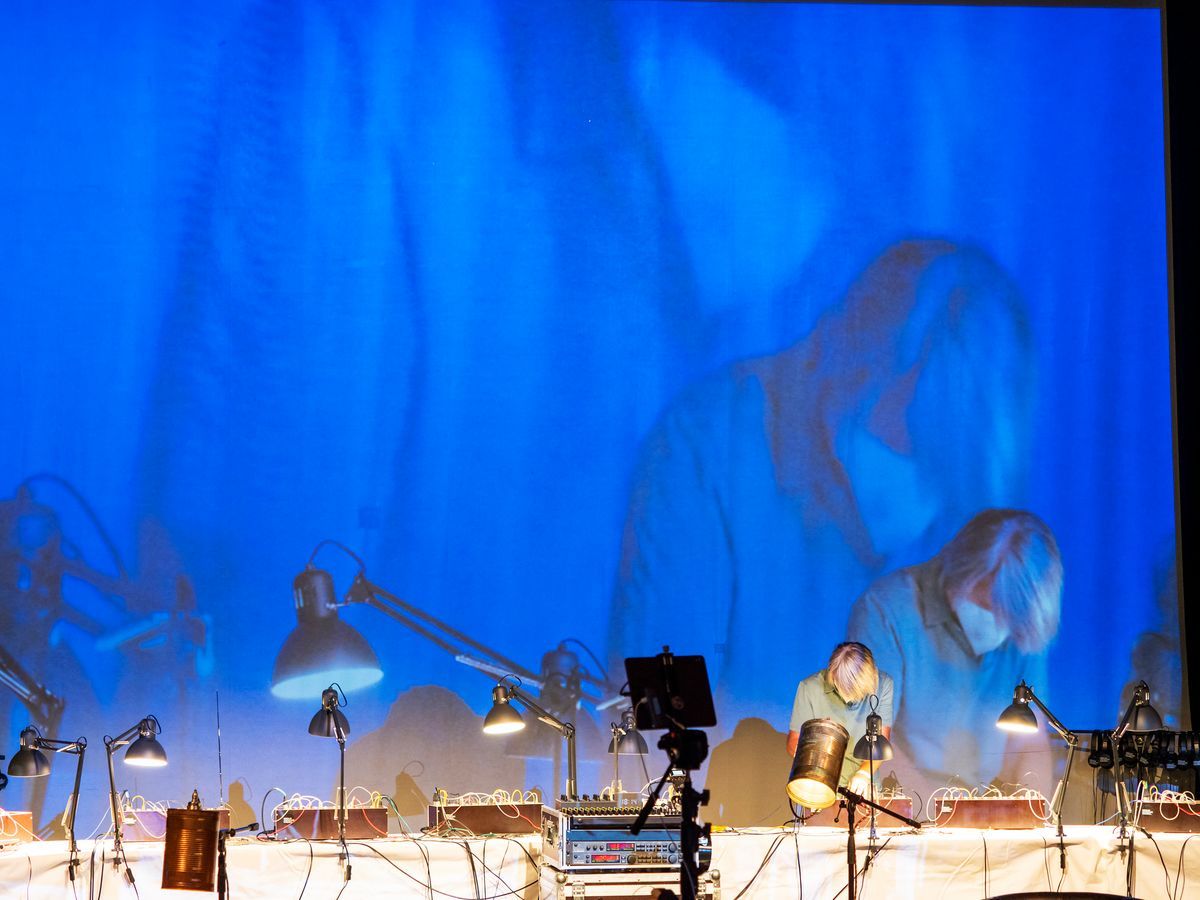