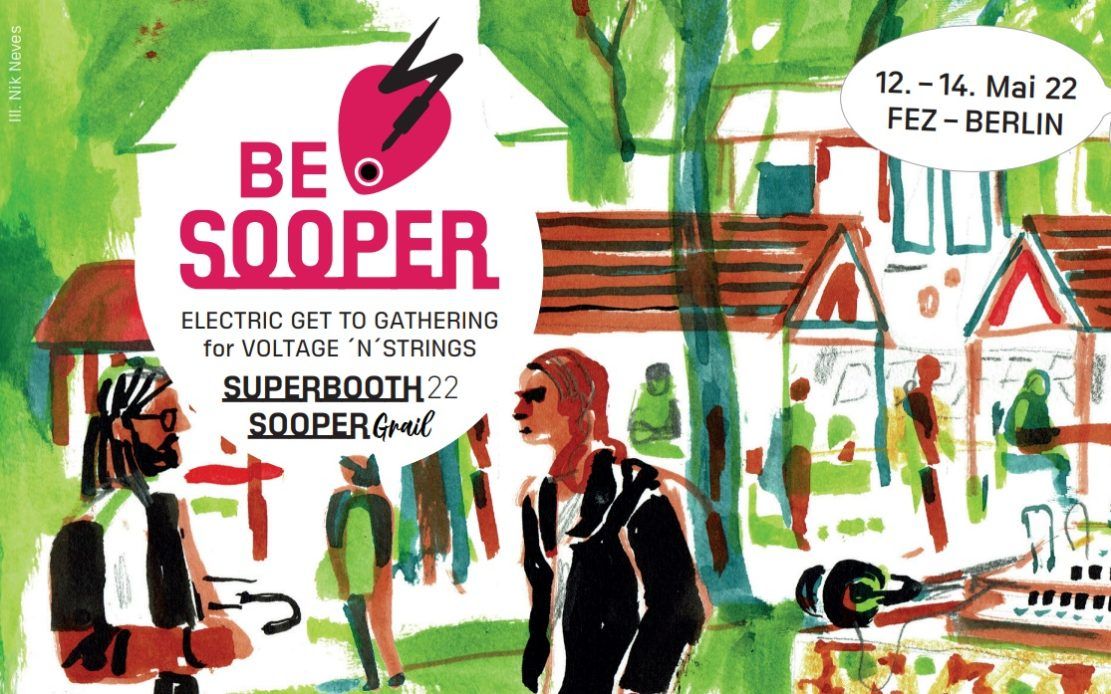 Under the common motto – BeSOOPER – SUPERBOOTH22 and the new SOOPERgrail bring together several thousand instrument makers, music and culture creators from all over the world in Berlin. For 3 days they will explain and discuss the future of music and music making at FEZ-Berlin. The event will create a meeting space that invites the exchange of
visions, ideas, sounds and stories.

The concert and cultural program starts every day around noon with Berlin students playing 12 modular synthesizers in the auditorium, it ends with a „Berliner Schule“ session in the foyer or a „Techno“ live set in the bungalow village before midnight. In between, there are up to twenty events and concerts daily at five venues in the spacious park area and FEZ-Berlin.
During the three days of SUPERBOOTH22 and the two days of SOOPERgrail, the at least 150 exhibitors of musical instruments are placed at three locations on the spacious grounds, also to make the sonic aesthetics of the products really tangible. The ticket system is simply structured, all tickets are valid for the whole day and all events of the fair.

On the first day of the event, Mute Records founder Daniel Miller and Depeche Mode producer Gareth Jones will be performing on the Sea-Side Stage as Sunroof, as well as AtomTM as headliner. In the early evening, singer-songwriter Lisa Morgenstern will also play here, including a Rhodes Mk8. The latest model of the classic electric piano will also be on display in the space of the trade show.

In the auditorium, the Finnish keyboardist KEBU proofs that you can still make live electronic music with classical electronic keyboard instruments, some of which are decades old, even today. A talk with Peter Kirn and international guests is still in preparation for the evening.

Friday the thirteenth is the first day of the guitar fair SOOPERgrail: Here it is also about visions that go far beyond ordinary remakes of American evergreens from Gibson to Fender. On the Guitar Stage at the Cinema, Matthias Grob tells his story from the development of the first guitar looper and its commercialization to today‘s hype, of which he as the „inventor“ unfortunately no longer benefits much. He shows his classic and builds a bridge to other colleagues with similar experiences.

For the upcoming generation, the daily Tapeloop workshops are a good introduction to this topic. Other guitarists as well as innovative exhibitors, also with guitars in the area between electronics and stringed instruments, make the fair a full-day program for interested and curious people.

The full program also runs on the other stages on Friday: Wayne Tailor, Mark Verbos, Julia Bondar and classic „Berlin School“ by Kontroll-Raum to close the day in the foyer. In the auditorium at 8 p.m., Hainbach, together with the Gebrüder Teichmann, will explain electronic music techniques of the past using the example of current cultural transformation between Germany and Japan on the occasion of the sixtieth anniversary of the Goethe-Institut Tokyo.

On Saturday, the workshops are often booked up the fastest, many musicians come with their children to enjoy the concerts and events and to learn something: In the guitar section, Sukandar Kartadinata explains his instrument with adjustable frets – the liberation from the twelve-tone scale. Schneider TM, among others, will be playing on the Guitar Stage. On the Sea-Side Stage St.Raumen alias T.Raumschmiere and St. John Mantle perform, in the Auditorium Peter Pichler shows the Mixturtrautonium during a workshop and plays a concert in the evening. The finale is provided by Martin Stürtzer on the keyboards in the foyer and the Dutch Maarten Vos with the Korean artist JS Park playing an incomparable techno set in the bungalow village.

All details regarding other concerts, (DIY) workshops, performances and events can be found on Superbooth.com and Soopergrail.com in the coming days.

And the Superbooth Berlin Team is announcing the following statement concerning the war in Ukraine:

“The war of aggression on Ukraine leaves us speechless. We sympathize and stand in solidarity with the suffering and struggling people in Ukraine and with the refugees who are being forced to leave their homes.
Our donation goes to CADUS e.V. which helps war refugees in Ukraine and worldwide. We would like to thank all those who do the same, if possible!”