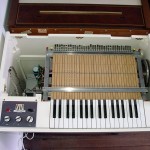 The Mellotron will celebrate its 50th anniversary now, looking back to a weird history of stolen rights, moneymakers, good and bad boys again and again. Luckily I read the whole story written down by the most competent collector of real mellotrones Klaus Hoffmann-Hoock. It is released in this months german KEYS magazine and really opens your mind for such a keyboard looking a bit boring on the first view. By the way Mellotron nowadays is still available from different sources, there is one guy in sweden that nobody really likes, the english gentlemen and another company from Germany that invented the modern (digital) remake of such a hardware instrument called Memotron. Their invention has been copied again by the swedish buddies so ..history s repeating!

Here is a little techno experiment with some new D