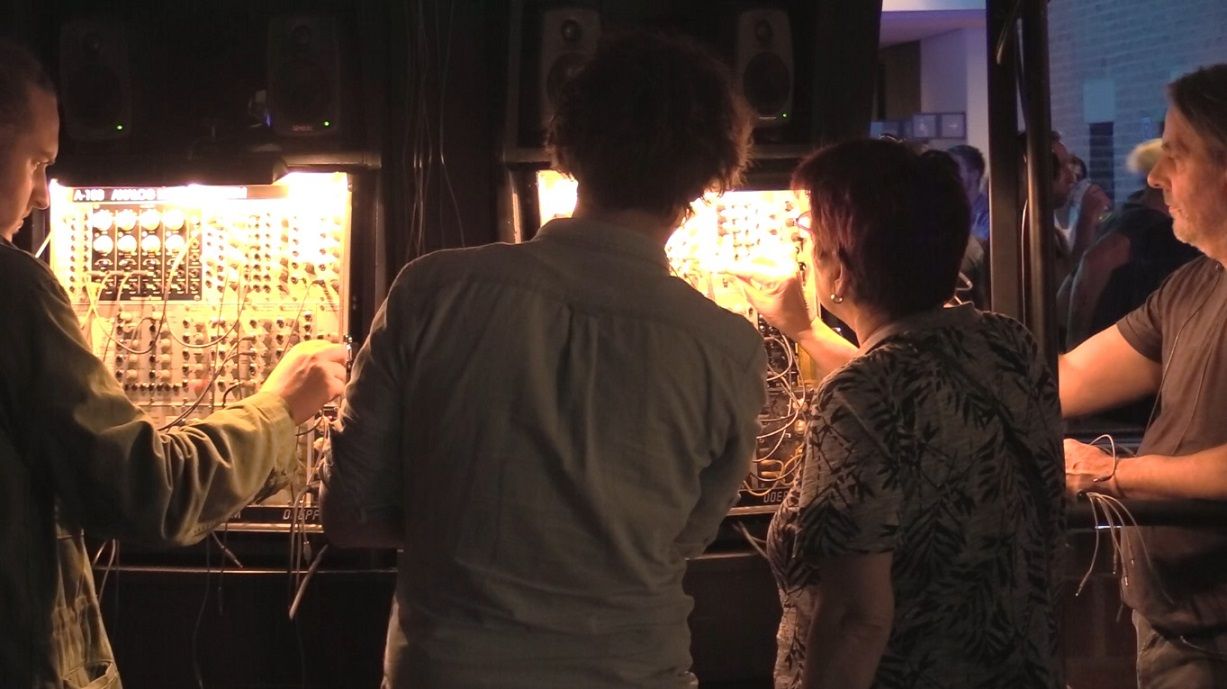 The already 17th edition of DIGITALANALOG took place on 20th and 21st of October at the Gasteig in Munich.

DIGITALANALOG is an audio-visual cultural and art festival organised by the Holmeier family on an annual basis and free of charge for visitors. The Gasteig is a cultural center with an integrated philharmonic orchestra, which is unique in Munich, due to its design and its size.

As in 2015, HerrSchneider took part at DIGITALANALOG this year with his self-developed synthesizer carousel on the 1st floor of the foyer, so that interested visitors could be introduced to the subject of patching and button turning on individual modules for the purpose of generating sound. Arno P. gave support and encouragement for those searching for sounds and rhythms.

It was particularly striking that there was a pleasing number of female guests interested in electronical sound generation, which was easily recognizable by the visitors of the synthesizer carousel. For example a young girl explaining her two companions what an envelope module is, how it is used and how it would influence the sound. It was very nice to see that there was such an enthusiasm for the matter of modular synthesizers. Apart from that, the carousel was well visited during the opening times and partly a queue formed at the entrance to the carousel.

It is also worth mentioning that our neighbours, with their “Das Labyrinth des Vergehens” (a lavish and magnificent audio-visual installation) had booked the artists Ströme and Panic Girl – so there was a small SUPERBOOTH17 reunion in Munich. Unfortunately, Dieter Doepfer, who was also supposed to participate there, was hindered due to illness. We wish you a good and swift recovery!

DIGITALANALOG presented a pleasant and colorful potpourri of electronic music as well as alternative bands who played Ska or Britpop. The visuals were quite impressive during the live gigs and also outside, where there was also a screen set up for the smokers on which live images of the interior were projected.

We are looking forward to DIGITALANALOG 18!